On Wednesday Cathy & I decided to visit the old Roman fort at Burgh Castle, which neither of us had been to before. Three of the four walls still remain of the fort, which is owned by the Norfolk Archaelogical Trust and described as "the best preserved Roman monument in East Anglia". Having parked up we took the path along several fields before heading across the final one to the fort itself. As we went we checked the ladybirds we saw, looking for Adonis Ladybird. This is a species that I haven't seen yet, but is apparently commonest near the coast. We didn't see any, but did see several Small and Essex Skippers.

We reached the fort and had a look around the walls before admiring the view across the river and out onto the marshes. The Berney Arms pub and windmill were opposite, and Cantley Beet Factory was also visible on the horizon. We walked down to the riverbank to get a better look, and I noticed a plant that resembled Wild Radish but with different seedpods. A check at home revealed that the plant was the brilliantly named Bastard Cabbage. I don't why it's actually called that, but I'd like to think that it was named by an angry Victorian taxonomist sick of only having cabbage soup to eat. A shower of rain passed overhead, followed by a period of bright sunshine that brought out more butterflies. Standing near the edge of one of the walls a Brown Hawker flew up to us at eye level, no more than a couple of feet away. 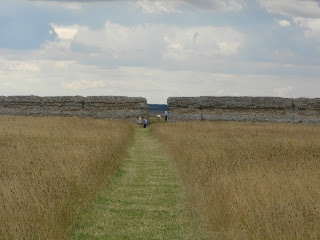 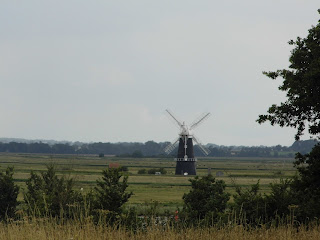 On our way back we saw more dragonflies, with both Brown and Migrant Hawkers perching on the hedge in front of us. We diverted into Burgh Castle church, which had an interesting display about the history of the fort, plus some excellent stained glass windows. There are often conflicts when churches host bats, so it was good to see that the church was embracing its bat population. On Wednesday 12th August they are having a bat walk with Philip Parker. Not only can you hear about the bats, there are also infra-red cameras installed to allow you to see them exiting the church. It starts at 7pm and costs £7 if you live nearby and fancy it. 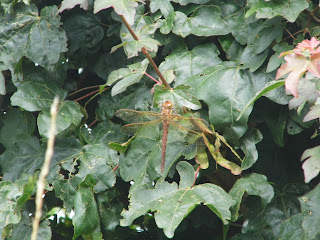 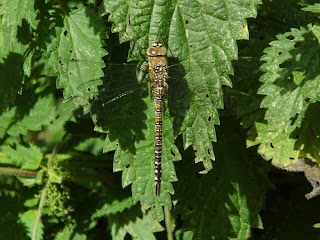 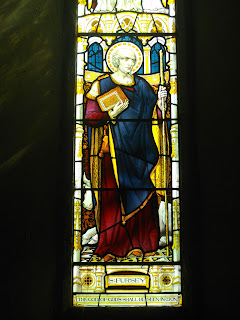 This interesting chap is St Fursey 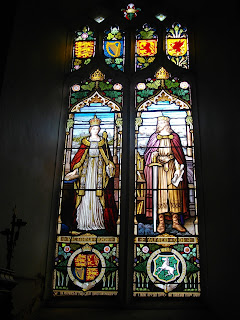