I seldom venture into Suffolk to twitch birds, but on Thursday evening I got a text from Ricky saying that he was going to Theberton, and as he was going to pass close by was I interested in coming? The target was a flock of ten Bee-eaters that had been in the area recently. No-one seems to know where they spend the day, so the idea was to head to the area that they had roosted the previous night in the hope that they would return. We left Norwich before there was any sign of them, but on the way we were able to check with Ben, who was on site and informed us that the whole flock were present.

It took around an hour to get to Theberton, and as we arrived lots of birders were leaving (seldom a good sign!). We quickly established that the birds were still present, but they were no longer showing well on telegraph wires, and were instead flying over some poplars before going to roost. Looking up as we walked along the lane we picked out the Bee-eaters, drifting and swooping above the trees. A few minutes later and they had all landed and vanished amongst the poplar leaves.

The group of birders that remained scanned through the poplars hoping to pick out some of the birds, and it didn't take long to pick out two, with a third occasionally visible when the wind blew the leaves back. Just like Golden Orioles they could be surprisingly cryptic, despite the bright colours. 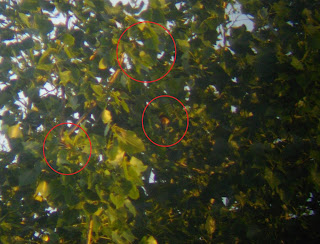 Before leaving we tried a different viewpoint from a nearby road, and Ricky noticed that there were actually two birds roosting cheek-to-cheek. The Bee-eaters had gone to roost at just after eight, and despite the Swifts and hirundines still hawking insects past nine, they seemed quite settled and never flew out, even when a helicopter went over the trees. Birders trying on Friday night were unsuccessful, so it seems we were lucky to see and spend a lovely sunny evening with these birds. Thanks of course to Ricky for driving and Ben for letting us know they were still there. 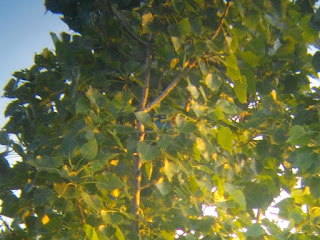