WHITLINGHAM: Looking for a shiny moth

On Thursday Tim Hodge had seen a rare species of day-flying moth at Whitlingham. The Horehound Longhorn moth, an attractive purple-and-bronze coloured species has very few Norfolk records, although it seems to be having a good year this year. It can sometimes be found on the flowers of Hogweed, and as Whitlingham Lane has a good mixture of both Black Horehound (the larval foodplant) and Hogweed, I had been keeping an eye out for this species for the past couple of years without success.

After work on Friday I headed down for a quick look along the lane, bumping into James Lowen in the process. Despite searching every Hogweed plant we could get to, we had no luck. Still, knowing that it is present I shall put more effort into looking for it on future visits. This close attention to the Hogweed flowers did pay dividends though, with several new patch species. Some small yellow and black longhorn beetles turned out to be Fairy-ring Longhorn Beetles, and I also added a couple of Capsid bugs. 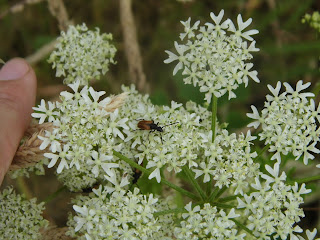 Having failed to find the Horehound Longhorn, I had a quick look around the picnic meadow, where I still couldn't find the Bee Orchids that are meant to be there. I did find a single plant of Common Broomrape, which is fairly common around Norwich but was a new patch record. A large micro moth that I repeatedly flushed from the long grass looks like Rush Veneer to me, possibly a migrant. 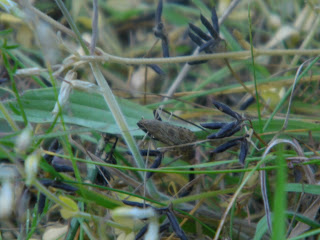 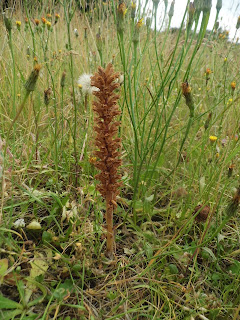