NORWICH: An encounter with the Bee Wolf

A discussion on the Norfolk Wildlife facebook page recently had mentioned a large colony of predatory solitary wasps known as Bee Wolves on the North Norfolk coast. The Bee Wolf hunts Honey Bees, and in the typical photographic pose can be seen carrying them, legs clamped round, back to the burrow. A good photo showing this can be seen here: http://www.natureconservationimaging.com/images/Philanthus-triangulum-flight1.jpg

The particular colony being discussed turned out to be on private land, but as alternative sites were mentioned one in particular stuck out, Norwich castle gardens. Whilst in Norfolk the Bee Wolf is mainly found in dunes, some have found an area of sandy soil in the centre of Norwich to their liking. I decided to have lunch in the castle gardens, and after a bit of searching I found the colony, and spent a while watching the Bee Wolves excavating their burrows and going about their business. I did see one bring in a Honey Bee, but it was far too fast for my photography skills. Watching these wasps that up until the previous day I hadn't even known they were there made me think about how many other interesting species are close by but I'm yet to see... 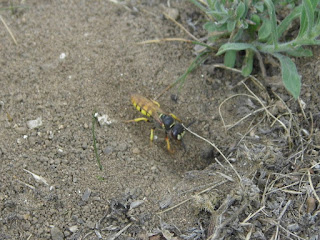 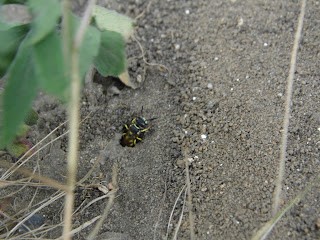