On Sunday I headed down to Whitlingham in the morning to do the monthly wildfowl count, only to notice some posters advertising an "open water event". Further down Whitlingham Lane there were cones and temporary traffic lights, and finally the sound of a public address system. Clearly there was no point starting to count the wildfowl properly, so I decided to head out onto the picnic meadow and then the woods to make sure my visit wasn't wasted.

I did walk down to the slipway to have a quick look, and was rewarded with a Common Sandpiper flying languidly west over the broad. Crossing over onto the meadow I immediately heard some Roesel's Bush Crickets and Long-winged Coneheads. The pick of the insects was a large sawfly/ichneumon that I initially thought was a Wood wasp, but actually it seems to be something similar. I also found a Red-legged Shieldbug, a species I have seen here before but not photographed. 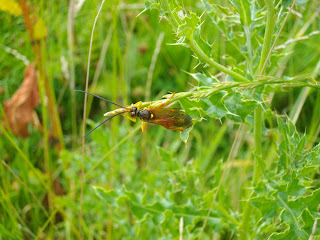 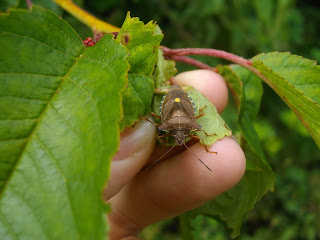 Looking at the clumps of trees in the middle of the meadow I noted a couple of new galls for my species guide, one causing rolled up Ash leaves and one forming a gall on Turkey Oak catkins. The woods were relatively quiet, although it was nice to see the large amounts of Enchanter's Nightshade in flower. I left the woods and crossed over to look at the river. A Norfolk Hawker flew past, and a shoal of Roach were visible in the shallows. 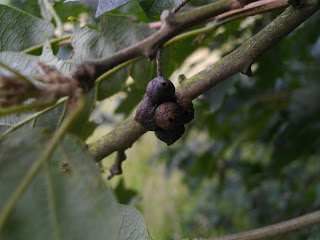 Walking back to the country park I looked into the long grass where Pyramidal Orchids can be found. I was pleased to see two pale pink flowering spikes, clearly different to the usual deeper pink flower spikes. A Birch Shieldbug was also of interest and a patch tick for me. 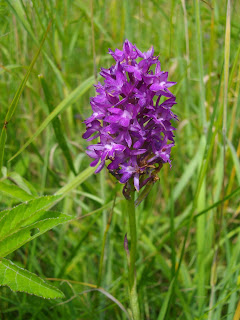 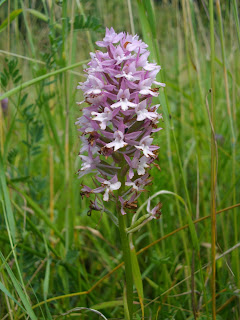 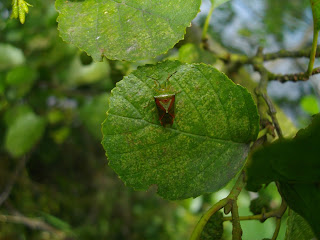