NORWICH: 10th ladybird of the year


Without really trying, this year has become my most successful for ladybirds, with several new species already this year. On Tuesday I noticed another species in Norwich city centre, a 10-spot Ladybird. Like many of the species it is very variable, but this was the 'standard' form. Despite having seen ten species so far, there are still a number of species around that other Norfolk naturalists have seen of late, such as Larch, Cream-streaked and Adonis ladybirds. I'd also like to see Water Ladybird, which appears to occur in Norfolk, although I'm not sure of any specific sites for it so simply a case of keeping a look out. 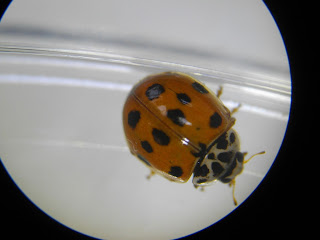