I decided to make the most of the warm weather and head to Earlham Cemetery after work. On the first Buddleia I came to I saw a large hoverfly, the distinctive Volucella inflata, a relative of the hornet-mimic Volucella zonaria that is being seen frequently at the moment. I photographed it and have now got confirmation that it is a new species for the cemetery list. This is no mean feat, as Norfolk's hoverfly recorder lives close by and has recorded quite a few species here! 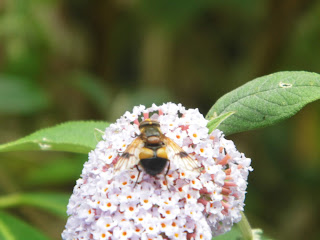 During the sunny spells I checked some of the uncut areas of the cemetery for butterflies. Two Large Skippers were still flying, and of the smaller skippers that I checked, all four were Essex Skipper. A female Common Blue butterfly was also nice to see. 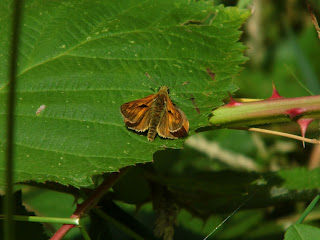 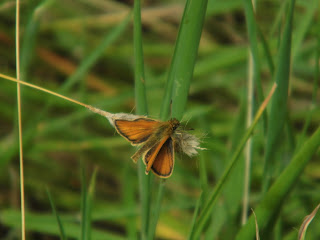 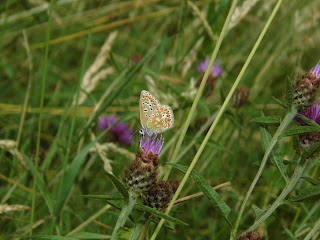 My main reason for visiting the cemetery was to look for Large Scabious Mining Bees (Andrena hattorfiana). This is quite a rare species, and in Norfolk is at the northern limits of its British range. There are several colonies on the coast, but the main stronghold is the Brecks, making the Norwich colony a bit of an outlier. After a bit of searching I found the main area of Field Scabious, and straight away saw the bees. They have pale yellow hairs on the back legs, but on almost all of the bees they had turned a lovely salmon-pink colour due to the scabious pollen. Despite there also being lots of Black Knapweed nearby, the Scabious Mining Bees kept strictly to the Scabious flowers. This was another interesting species that it was nice to see so close to the city centre. 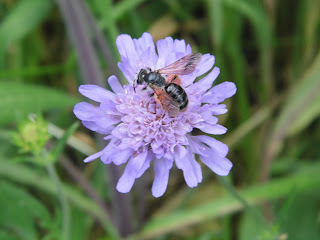