On Sunday afternoon we went back to North Walsham to see friends, but we left a bit early to check out a couple of roadside nature reserves. My targets were Knapweed Broomrape and Purple Broomrape, two parisitic plants that I had searched for earlier in the season before they had emerged. The first one was the easiest to find - Knapweed Broomrape is also known as Tall Broomrape, and having located some Greater Knapweed I soon saw several spikes of it's companion plant. The flowers were old and orangey-brown, but still had attracted several insects including a Hairy Shieldbug. 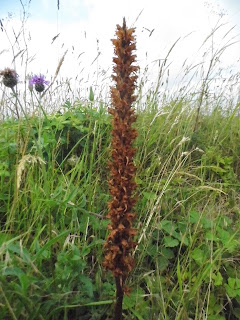 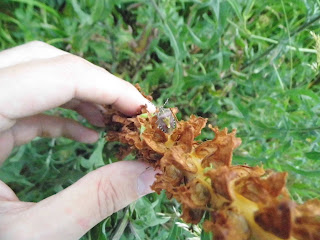 I had less luck at the second site, with no sign of any Purple Broomrape. It might not have flowered there this year, but it might just be that I left it too late in the season. It wasn't a complete loss though, as well as my first Gatekeeper of the year I also saw a Latticed Heath moth, a new species for me. 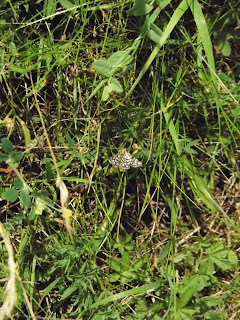 In addition to the two Broomrapes I have seen (Common and Knapweed), and the one I missed (Purple), Great Broomrape also grows in Norfolk. It was thought extinct for a time, but found again on private land somewhere a few years back. It may well be re-found elsewhere in the county, so if you see a large Broomrape plant growing close to gorse or broom (it's main host plants) on land with public access then I would appreciate an email!
Posted by James Emerson