In 2012 I had a very good year for odonata (dragonflies and damselflies). In terms of damselflies I saw Scarce Emerald and Small Red Damselflies for the first time, along with the recently colonised Willow Emerald and the vagrant Southern Emerald. Of the dragonflies I finally saw Black Darter, and also saw the now fairly regular migrant Red-veined Darter. These additions took me up to 29 Norfolk species (including Yellow-winged Darter from an invasion year in the 1990s). With this in mind I was interested to hear in 2014 when several Lesser Emperor dragonflies, a species that I hadn't seen, turned up in Norfolk at Felbrigg and Filby. I went to Filby to have a look, but didn't manage to see one.

Fast-forward a year, and Lesser Emperors were once again seen at Felbrigg and Filby. Feedback from an observer last week was that sightings were less frequest as the temperature dropped, so rather than trying after work I waited until the weekend, and luckily Saturday morning was sunny. Cathy & I arrived and set off along the boardwalk to look out over Ormesby Little Broad, which seemed to be more reliable for sightings than the Filby Broad boardwalk that I had tried last year. Several people were at the viewpoint and confirmed that there ad already been sightings that morning. Most of the dragonflies zooming past were Norfolk Hawkers, but it wasn't long before we got our first sighting of a Lesser Emperor flying past. A while later we got another look, once again flight views only. There didn't seem much chance of it settling, but I was just happy to get to see a new species.

On our way back to the car park we saw a wide range of invertebrates.The two highlights were the attractive hoverfly Chrysotoxum bicinctum, found by Cathy, and Four-banded Longhorn Beetle, of which I found two. There was also a range of bees, hoverflies and the commoner Yellow-and-black Longhorn Beetle. A White Admiral butterfly was also nice to see, although it dodn't stop to be photographed. A Common Emerald damselfly and a Brown Hawker were also new for the year. 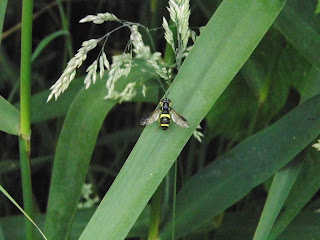 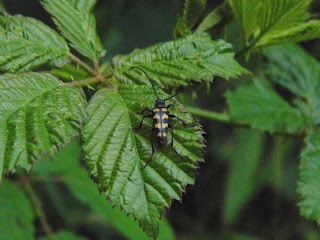 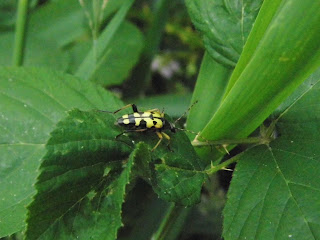