So following on from the last post, Tim and I were working our way along the south shore of the Great Broad, stopping at frequent intervals to look at the various insects that we found. The most productive areas were the patchs of Hemp-agrimony and Water Mint, which provided lots of nectar. A grassy corner looked like it might come up with some different species but was fairly poor. We did see a Short-winged Conehead, the second one that I have seen here in recent weeks, having previously only seen Long-winged. It was also here that we saw the Adonis Ladybird, and close by a recently-emerged Pebble Hook-tip moth was resting on an Alder leaf.

From here we crossed Whitlingham Lane and had a look in the small area of woodland between here and the picnic meadow. Walking around the southern edge of the picnic area we stopped to have a look at various galls, and also picked up another fly and a Weevil. A ground beetle had climbed a plantain stem and showed well, preferring to wave it's jaws at us from the top rather than run away! Thanks to Tim for his help in finding and identifying many of the species seen throughout the day. 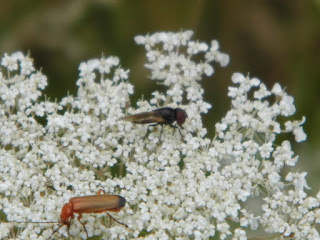 918. Chrysogaster solstitialis - a small black hoverfly with red eyes [Edit: The photographed insect is actually Chrystogaster cemiteriorum, thanks to Roger Morris for the ID] 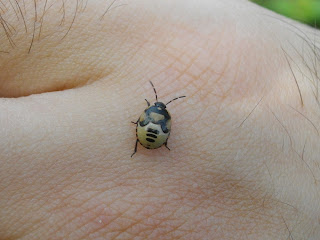 919. Pied Shieldbug - A late instar. I shall look later in the year for the adults. 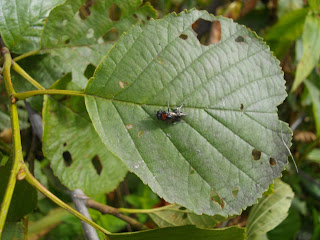 920. Alder Sawfly - a distinctive species with a red splodge marking on the back 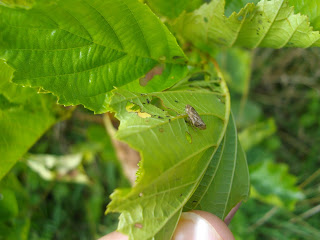 921. Common Froghopper - I have seen lots of Cuckoo-spit before,
but not actually seen the adult froghopper. 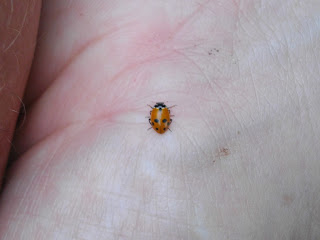 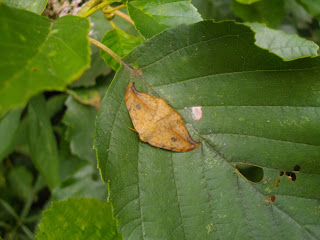 924. Coremacera marginata - An interesting looking fly that hunts snails. It flew off before I could get a photo, see here for a picture and more info. 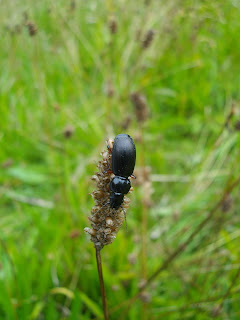 Tim has also got back to me with identifications for a couple more species that we saw on Sunday.
927 Cassida vibex, one of the Tortoise Beetles (Naturespot picture here)
and 928 Curtonotus aulicus, a Ground Beetle (on Naturespot here).

Note that where I haven't taken a photo (or I have but it is rubbish!) I have linked to some entries on the Naturespot website. Naturespot (www.naturespot.org.uk) is an excellent website set up to show the wildlife of Leicestershire and Rutland, and has information on most of the species that I mention. Not everyone will be particularly bothered what everything looks like, but the option is there to have a look if you want to.
Posted by James Emerson