Saturday was initially the date for a fungus study group foray at Sculthorpe Moor, but this had been rescheduled. There were a range of places I could have gone, but I had settled on a moth and butterfly event at Weeting in the hope of seeing some Breckland specialist moths. Cathy had agreed to come with me, although she perhaps regeretted it when it became evident how hot it was going to be. Two of the main species I hoped to see were Lunar Yellow Underwing and Cream-spot Tiger moth, rare and spectacular respectively.

The event was advertised as 10-12, so I assumed that this would be about an hour going through a moth trap, followed by a short walk to look for butterflies and day-flying moths. This turned out to be a mistake on my part, as when we arrived the moth trap had been checked and the species were neatly laid out on a table, complete with labels. We had a look at them, then were taken out for a two-and-a-half hour walk! 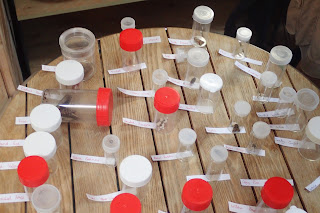 Sadly there was no Cream-spot Tiger, but Lunar Yellow Underwing had been caught. There were several other new species for me as well, including Brown Scallop, Satin Wave, Four-dotted Footman and Plain Wave. Festoon was also new, and slightly ironic as Gary had caught one in Norwich the previous evening and invited me round to see it that afternoon. 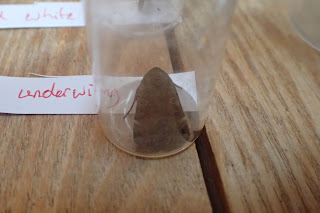 The walk started well, I found a new plant bug, Capsus ater, and Cathy found a Dune Chafer, a nice metallic species which depsite the name does occur in some sandy inland areas like the Brecks. A bit further on a couple of birders got a Stone-curlew in their 'scope for us. After that most of the walk could be summarised by the phrases 'very hot' and 'another Meadow Brown'. It was interesting to see an area of the reserve that I'd not walked along before, including a recently reverted field. There were quite a few Small Heath butterflies, Cathy spotted two Grey Partridges and a Brown Plume was a new moth to add to the earlier ones. Once we got to Hockwold Heath we turned round, and despite the heat made it back to the car in good time. 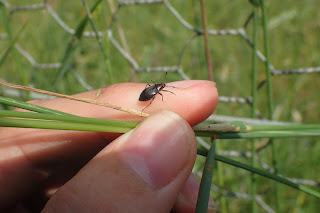 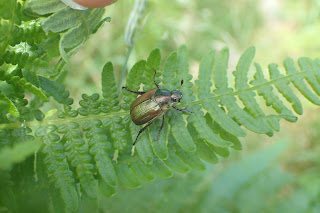 By now rather hungry, we called in at the Brandon Country Park cafe for lunch before heading back to Norwich.
Posted by James Emerson