After our successful Glapthorn visit we moved on to Salcey Forest, a Forestry Commission woodland. Upon arrival we had found a picnic table to have lunch on, however a sharp shower had us retreating to the car. With good weather we would have been confident of seeing Wood White here, but now with 100% cloud cover and showers our chances were not looking good at all.

We set off into the woods, paying particular attention to the wider rides with Meadow Vetchling and Vetch spp. We reached one edge of the wood without seeing a single butterfly species, although a couple of Ringlets appeared shortly afterwards. Ringlets seemed to be either hardier or more numerous than the other species, as we saw several more close by. A Sabre Wasp was off interest, and Cathy found two tiny eggs on a blade of grass. 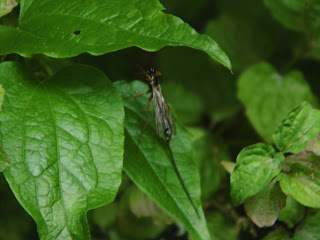 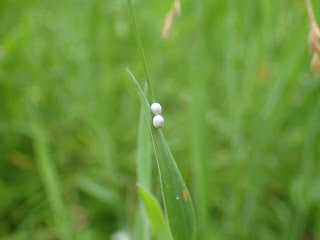 After retracing our steps to the last crossroads we took another path along the woods. Having accepted that very few butterflies were on the wing at the moment, we were now checking the undergrowth for roosting whites. This was unsuccessful, but the extra scrutiny did turn up a number of other insects, including a Blood-vein moth, an Alder moth (unfortunately a bit on the dead side), the beetle Ischnomera cyanea and a new hoverfly for me (Leucozona laternaria). A Fox on the path in front of us was another highlight. 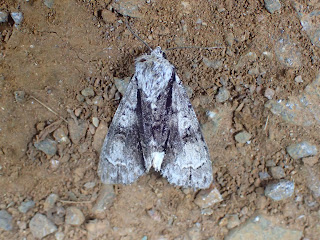 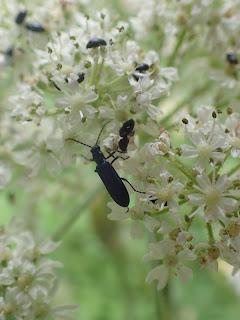 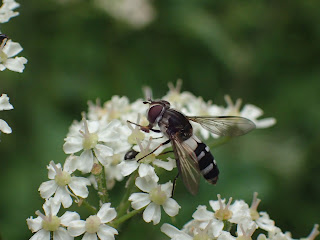 We continued around the wood until we got to an open crossroads area, where Carl had seen several Wood Whites the previous year. A search of the area turned up one Large Skipper. It was now a question of how long we were prepared to wait. In the distance there appeared to be a small patch of sunshine, so we agreed to wait and see if that passed over, then call it a day.

There was a bit of a breeze, so it wasn't too long until there was enough sun to feel the warmth, and almost immediately a White Admiral flew out of a nearby tree. Carl called out that he could see two Silver-washed Fritillaries, but this was ignored as Cathy had spotted a smallish white butterfly. We rushed over and tried to keep watching it as it flew over some scrub. Our hopes were dashed however, when Carl noted that there was a small amount of black on the wingtips - it was a Small White.

The sunny spell was already passing us, but having stayed in the area where the Small White had been I spotted another white butterfly. This one immediately looked better, with a weak lolloping flight and rounded wings. I called the others over and we all agreed it was indeed our target, a Wood White. Not to be outdone, Cathy then found a perched one just to the right of the one we were watching. With the sun now behind the cloud it showed no signs of going anywhere, and we managed to get some good views and photos. Hurrah! 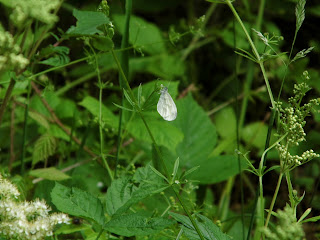 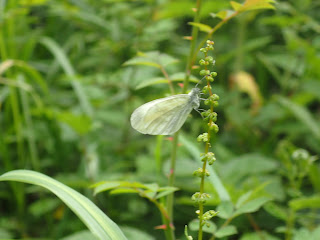 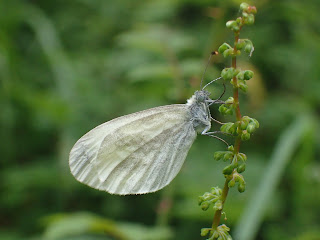 Before we headed off I noticed an odd-shaped insect in the vegetation opposite, which upon closer inspection turned out to be a Dusky Cockroach, another excellent addition to the day's species list. 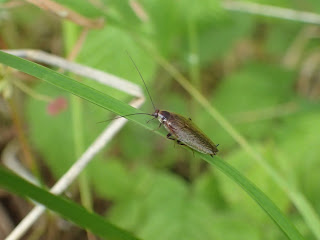 Thanks to Carl for an excellent tour (if you are interested then you can see a list of tours that he runs here: https://www.wildlifetoursandeducation.co.uk/tours/special-day-tours/)
Posted by James Emerson