At the start of the year I had decided that I would take advantage of being quite close to Catton Park by visiting at least once a month to track the changes through the year. This lasted until March, then basically the amount of wildlife increased and I split my time between Whitlingham, target species and various other ventures. On Wednesday the weather had reached a warm but not stifling balance, so I decided to pop down after work for an hours walk around.

As it was the start of rush hour I decided that instead of crossing the ring road and heading to the Oak Lane entrance (a walk that would have resembled the start of Horace Goes Skiing), I would cross at the traffic lights and go in through the woods. This immediately paid off as I was only a few paces in when I saw a Vole pearing out of its burrow. It watched me, I watched it. After a minute I reached for my camera, and it vanished into the hole.

With the visit already worthwhile, I had a wander out of the woods and into the meadow, where there was a (probably seeded) area of wildflowers, mostly Ox-eye daisies. A number of moths were flying, but on closer inspection most of them were Garden grass-veneers, which look surprisingly big in flight. I did find a more interesting moth though, the Triple-stripe Piercer (Grapholita compositella). After checking at home I found that this was a new TG21 record, which was satisfying. 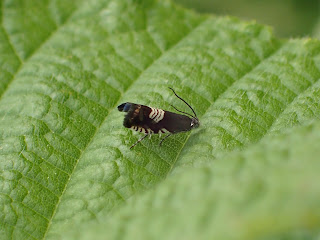 A detour to check out an area of bare sandy soil was interesting, because there was a large area of Corn Spurrey, which I'd only seen as an arable weed once before. There was also a fumitory growing nearby. 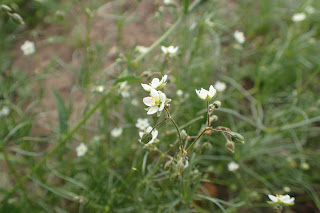 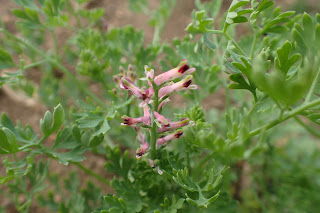 Back to the meadow, and several Merodon equestris hoverflies were picked out, as well as a Slender-striped Robberfly. This species, which like the piercer was a new one for me, holds its body in a distinct pose, looking a bit like a stubby damselfly. 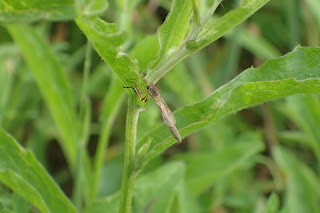 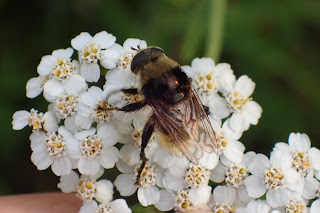 A quick walk across part of the parkland turned up a few common beetles and bugs, and some dried specimens of Common Broomrape. I should probably make sure I return in July! 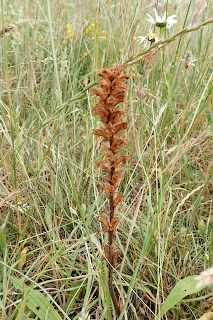