On Sunday monring I received a message from Dave Andrews to tell me that he had seen a probable Lesser Emperor dragonfly at Whitlingham, so to keep a look out. Shortly afterwards he got better views of a second individual and was able to confirm that there definitely were some present. This species is a rare migrant to Norfolk, but has seemingly established low-level populations at Ormesby Little Broad and possibly Felbrigg Lake. As far as I'm aware this is the first Whitlingham record.

I headed down to Whitlingham late morning, and after a while managed to get a couple of flypast views, enough to identify the dragonfly as Lesser Emperor, but too quick to get my camera on it! The sun went in and I didn't see it again, so I had to leave for home. I also saw a couple of Emperors, lots of Black-tailed Skimmers and several species of damselfly. At least another two people managed to see a Lesser Emperor later in the day, around the pump-house area.

If anyone does manage to get photographs of the Lesser Emperor(s) then I would be grateful for one to add to my Whitlingham odonata guide, and also to ease the passing of the record with the county recorder. If you are going to look then the area to focus on is the south shore, anywhere from about level with the main island eastwards to the end of the Great Broad.

On my way back I checked a couple of areas that had Bee Orchids last year, but only found one flowering spike, near the entrance to the barn car park. 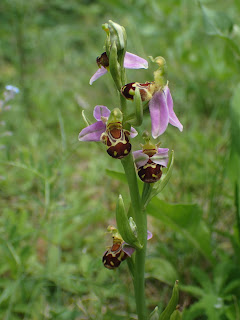