We are currently in the middle of Norfolk & Norwich open studios 2017, a chance to visit the studios of local artists, chat to them and buy artwork. One of the people opening her studio in Norwich is Vanna Bartlett, who has some excellent linocuts and paintings on display. I know Vanna and her husband Jeremy from the Friends of Earlham Cemetery, and had an ulterior motive for visiting as they have a garden that is managed with wildlife in mind, and as a result attract some interesting insects, particularly bees.

After my Whitlingham visit and lunch, Cathy & I headed round to Jeremy and Vanna's house. We admired the artwork before relocating to a big patch of Catmint. It was here that two Anthophora species had been seen regularly visiting. If you have been watching Springwatch that name might ring a vague bell, as Anthophora plumipes is the Hairy Footed Flower-bee, which was shown in some amazing footage early in the series. I have seen lots of A. plumipes, but hadn't seen any other members of the genus.

We hadn't been there long when Vanna pointed out the first of the two species currently visiting, Anthophora furcata. It was quite a small bee, with a yellow face and black eyes. We had set off for a look around the rest of the garden when we were called back, as the star attraction had arrived. This was Anthophora quadrimaculata, another small bee, this time with pale hairs on the tergite edges and greenish eyes. This species is rare in Norfolk - Nick Owens recent Bees of Norfolk book shows only three tetrads for it, an older Norwich record and recent ones from Gorleston and this garden! 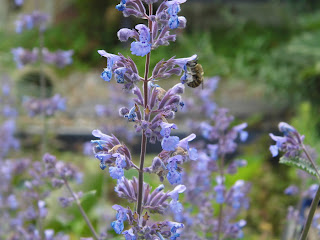 Vanna clearly knew the bee's behaviour well, describing how it came in and fed in a similar way to Treecreepers, in that it flew low onto a flower spike and worked its way up, stopping before it reached the top and flying to another spike to start again. Knowing this enabled me to focus above it and get at least one photo in focus!

Other wildlife highlights from the garden included a Speckled Bush-cricket, Large Red Damselfly, Conopid fly sp and another bee, Megachile centicularis. Thanks to Jeremy and Vanna for their hospitality - open studios is still running until the weekend, so why not go and buy some art? 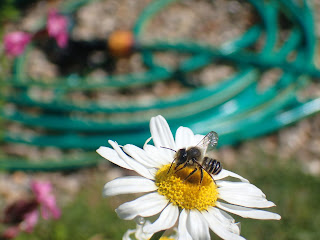