Earlier in the year I had attended a walk at Sparham looking at lichens with the county recorder, Peter Lambley. Afterwards Peter had agreed to hold several other walks later in the spring for anyone who wanted to learn a bit more about lichens in different habitats. I had been unable to attend the first of these at Salle church, but met Peter on Saturday at Winterton dunes to have a look at some dune Cladonia species. I had previously been on a lichen workshop in the Brecks, so this gave me the opportunity to compare some inland heath and coastal heath species.

Whilst the dunes didn't hold as many different species as woodland, churchyards etc, the species present occurred in good numbers. We had a look at Cladonia arbuscula, which had long bent-over tips with 3 or 4 branches near the end and swept in the same direction, and compared it with the abundant Cladonia portentosa which had the tips swept in different directions. 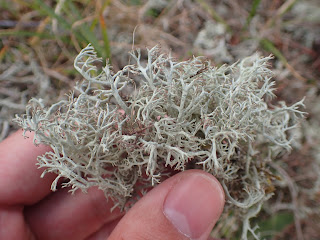 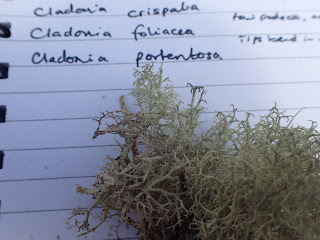 One of the highlights for me was seeing lots of red-tipped lichens. I must have seen these before but don't remember it, and despite their small size they look spectacular. Most were Cladonia diversa, with red blobs around the edge of the 'cups', but there was also Cladonia floerkeana, which has the blobs on thin stalks. 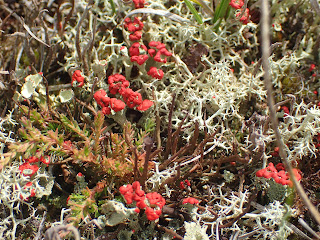 Most of the lichens we looked at were growing on the ground or on the stunted trees, but we did also see four species growing on a concrete telecoms block, and an unassuming new species for me, Lecanora conizaeoides, was found on the totem pole. In addition to the lichens we saw a good stand of Royal Fern, two Red-veined Darters (the first of which was more obliging than the one I saw at Beeston earlier in the week), a gall on Aspen, Marram Weevil and around 30 Bee Orchids. 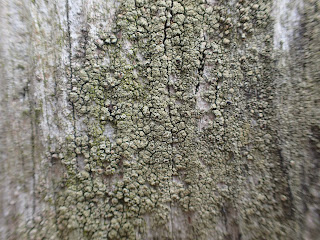 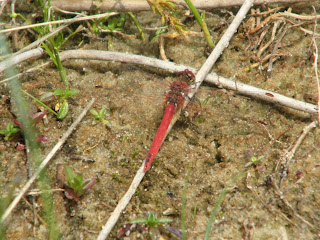 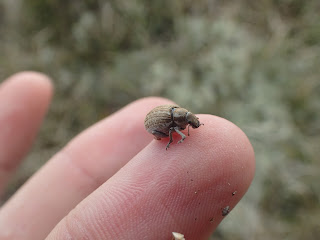 My thanks to Peter Lambley for giving up his time to show me the lichen flora of this area.
Posted by James Emerson