Having returned from our Weeting plant walk and bought a cake from the cake stall, it began to rain. We retreated to the car for lunch as the rain pelted down. The rain looked set, but we agreed to call in to the Artemisia reserve at Brandon on our way home. This unlikely nature reserve is a small rectangle of grassland on an industrial estate - the last bastion of the rare Field Wormwood. 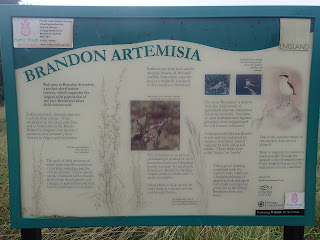 As we parked up the Field Wormwood was immediately visible from the car, but as the rain was beginning to relent all four of us decided to go and have a closer look. We managed to find some flowering, although it wasn't much more spectacular than the ones that weren't. The reddish stems were probably the nicest bit about it actually. 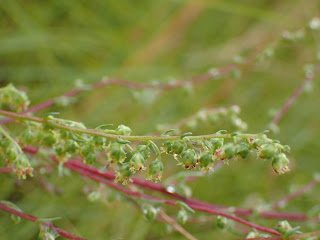 There were a few more plants of interest such as Blue Fleabane and Lucerne, whilst I found a young Tortoise Shieldbug, an adult Crucifer Sheildbug and quite a few Stripe-winged Grasshoppers. As we were about to leave Vanna called out "Argiope", which just got here a blank look from me. She pointed out the Argiope, and it clicked that it was a Wasp Spider (Argiope bruennichi). It was probably a youngish female as the colours weren't as bright as they can be, but a new species for me and a nice one at that. The rain even abated to allow Vanna to sketch the spider. It had an orthopteran wrapped up in silk - probably one of the Stripe-winged Grasshoppers, although there were quite a few Long-winged Coneheads about too. 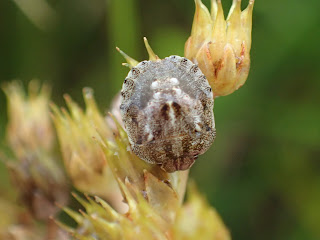 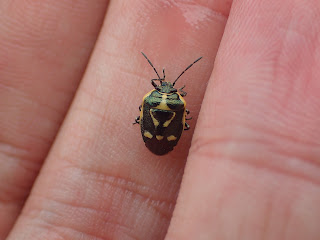 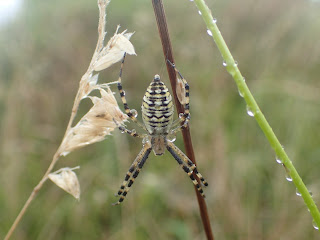 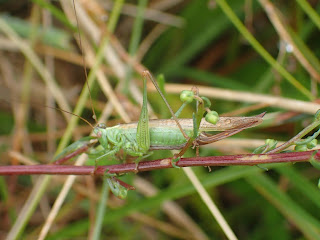 Long-winged Conehead (this one is an extra-long, i.e. macropterous female)
Posted by James Emerson