Keen to exploit the fickle periods of sunshine I nipped to Wheatfen one afternoon to look for beetles. I'd barely left the car park when I saw a Grass Snake moving through the vegetation, which was a nice start. I then met Will the warden, and accompanied him back to the warden's hut to buy a copy of the Mammals of Wheatfen, the first in a series of wildlife guides that are being produced. You can pick up a copy from Will for £3 if you see him there.

Whilst speaking to Will I had asked him where the best place to look for two species of beetle was. One of them is the very rare Galeruca laticollis, currently Wheatfen is the only UK site for this species. I have seen the larvae before, but not the adult beetle. The second species was the Musk Beetle, an impressively large metallic green longhorn beetle that I hadn't seen for years. Predictably both were at the far end of the reserve, so I set off in that direction.

Galeruca laticollis has a two foodplant life cycle. The larvae eat Meadow-rue but the adults eat Creeping Thistle, so it was the latter I had to look out for. As Creeping thistle is a common plant this meant a lot of plants to look through! On my way through a wooded patch I spotted two obliging Willow Emerald damselflies. 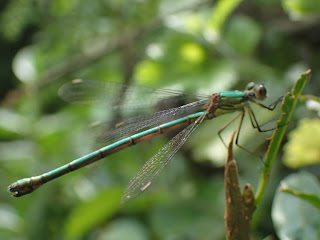 Emerging out into the open I started checking thistles, and found that the commonest creatures on them were planthoppers. I also found some Tortoise Beetles (Cassida vibex), both adults and the larvae, which create a faecal shield from their droppings in order to camouflage themselves. A Creeping Thistle Lacebug was a new species for me, having previously seen the similar Spear Thistle Lacebug. By now it had clouded over and I could hear thunder in the distance. I had checked a lot of thistles, but eventually found my target, with at least six Galeruca laticollis beetles present. 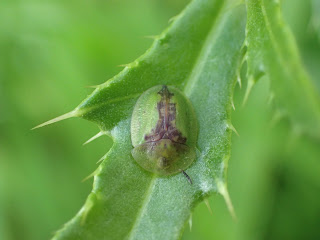 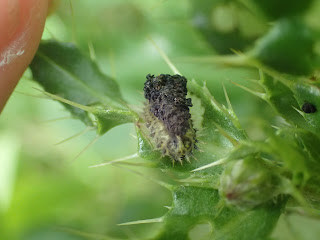 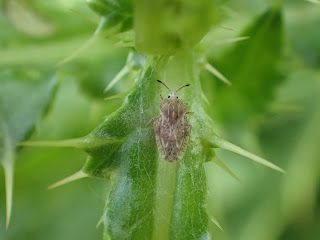 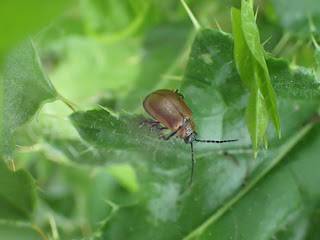 It began to rain almost as I found the beetles, and there was very little shelter about. Fortunately the storm fizzled out, allowing me to seek a bit of shelter from the lashing rain near an old willow. It carried on raining, so in the end I waited until it was less heavy and sloshed my way back. 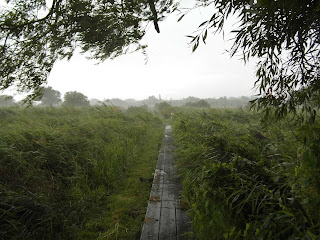