This week I took a couple of hours out to look for another one of my target species, the Fen Mason Wasp, (Odynerus simillimus). This species was considered to be extinct in Britain as recently as the 1980s, but was rediscovered in 1986 and has since been recorded at a handful of sites in Norfolk, Suffolk and Essex. I had left it late - the main flight period is June/July, but I was hoping there would still be a few about.

Probably the best site in Norfolk for this species is Sutton Fen, which is closed to the public, but fortunately I had been told about another colony along a public footpath in east Norfolk. I was told that the easiest way to find them was to keep an eye on an area of Ox-eye Daisies that they visited regularly. You can imagine my thoughts therefore when I arrived and found that the vegetation along the path had been strimmed, eliminating said daisies.

The only thing I could do is hope to locate the nest holes and keep watch in the hope of seeing a Fen Mason Wasp enter or leave. I headed off, and eventually found a series of holes in the path. There were no turrets, but then these could easily have been knocked down so I wasn't too concerned. I looked down a few holes and saw tiny faces looking back up at me. I was uneasy - they didn't look like my target species. Eventually a few emerged, and as suspected they were a different species, Ornate-tailed Digger Wasp. 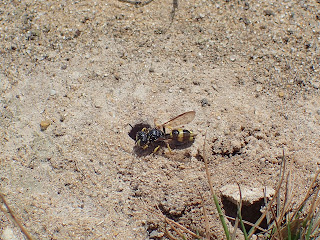 I walked a bit further on but didn't see any more holes. I decided to turn round and double-check I hadn't missed anything, but also texted Tim to check I was in the right place. Fortunately he got back to me before I had given up, telling me that I needed to head a bit further along the path. With renewed hope I turned round and kept searching, and eventually found the holes, this time complete with tiny turrets. A Fen Mason Wasp emerged for one, was on view for about a second and flew off. Hurrah! I had hoped to see one for longer though. 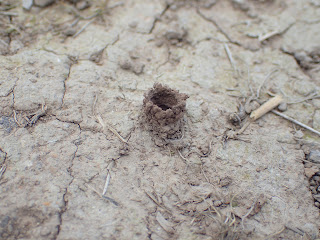 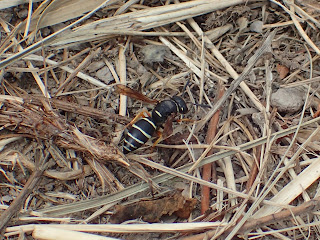 I waited a few minutes to see if the wasp would return, but when it didn't I went a bit further down the path to look for more holes. I didn't find any more, but I did come across some Yellow Loosestrife Bees nearby, which was nice. Heading back to the turrets, I found a place to sit and wait (and have lunch) and after a while a few Fen Mason Wasps returned. One in particular landed in front of me, and walked to a previously unseen whole under a clump of grass. After taking a few photos I left the wasps. It was only then that I could really appreciate the rest of the landscape, the open marshland, low-flying Marsh Harriers and pinging Bearded Tits. An hour ago I was feeling frustrated at missing out on my target, but now I was enjoying being out. A fickle thing this nature watching. 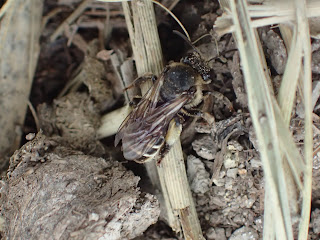