This is the second installment of Saturdays Breckland day. Having got out of the car we immediately noticed a colony of Pantaloon Bees (Dasypoda hirtipes) behind the car. This particularly delighted Vanna, who had announced she wasn't particularly interested in the plants and had come to look for bees. As we watched them we noticed several flies following the bees - presumably they were brood parasites. At least two solitary wasp species were also present, Cerceris rybensis and one other. 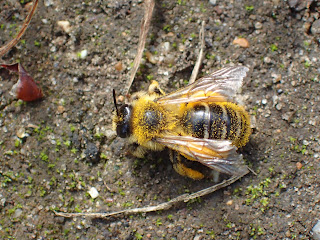 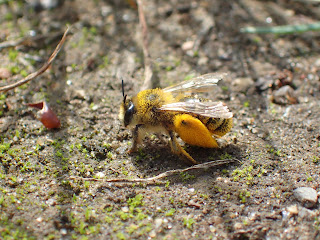 Having signed in and had a look at the helleborines, we went and had a look at the catch from the moth trap. There was a reasonable selection, albeit probably only 30 species, but four of the macro species were new for me, including a very nice Clouded Buff. The other three new ones were Small Waved Umber, Oblique Striped and Square-spotted Clay. 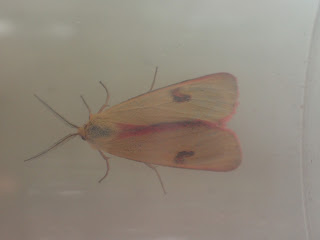 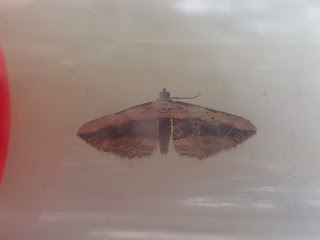 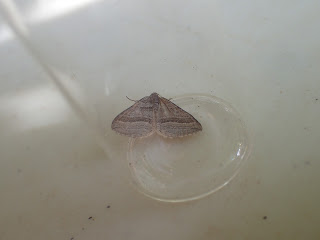 Once the plant walk had begun I took the opportunity when we stopped to check around the bases of Storksbill and Bedstraw plants. The reason for this is that there are several scarce Leatherbugs and Shieldbugs that are only found around the bases of these plants. This searching paid off almost straight away, when I found three Fallen's Leatherbugs. Later on the warden found a different species, which we couldn't identify in the field. It was probably either Breckland Leatherbug (very rare) or Cryptic Leatherbug. I took a few photos, but as it was through a pot they aren't great. 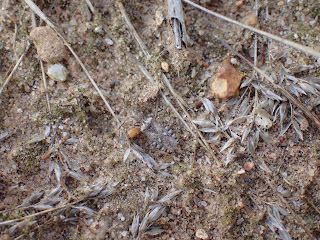 Fallen's Leatherbug. Like the Heath Assassin Bug seen at Marsham, the camouflage is very good, but once you get your eye in it becomes easier. 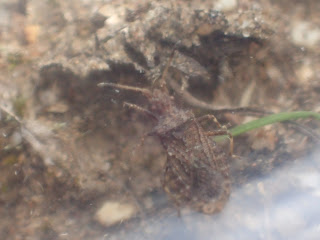 Members of the group found several caterpillars out on the heath. Hummingbird Hawk Moth was a new caterpillar for me, and a sign that it has been a good year for them. The second hawk moth caterpillar of the year appears to be Small Elephant Hawk, another good one. 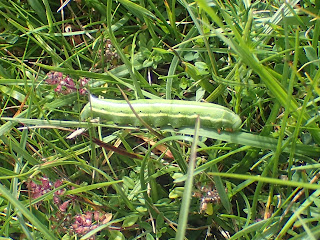 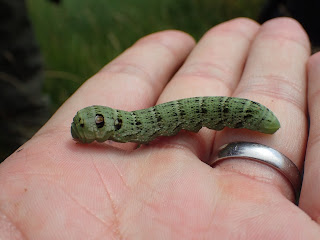 A thistle on the hill held ten Hairy Shieldbugs, including a mating ball. 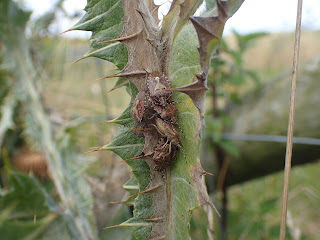 The highlight of the visit, although I didn't know it at the time, came when we were shown the White Horehound. The warden told us that it was the foodplant of the very rare Horehound Plume moth, the only Norfolk records being a couple seen at Weeting in 1945. As is my routine whenever I see a rare plant after having a look at the flowers I began looking for leaf mines, plant bugs or caterpillars, and I found a small hairy green caterpillar. Nobody knew what the plume caterpillar looked like, so I photographed it to check at home. Lo and behold it was indeed a Horehound Plume (Wheeleria spilodactylus), rediscovered in Norfolk after 72 years! 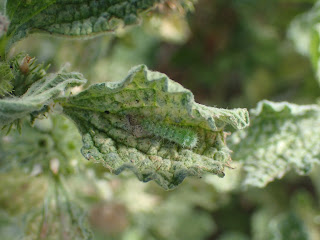 Several interesting bees were seen, including Melitta haemorrhoidalis feeding from Harebells, a Colletes sp. on Wild Migonette and Ragwort and another all black one that Vanna is hoping to identify. A couple of Adonis Ladybirds complete d the insect interest. 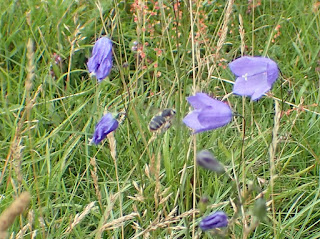