At the weekend the NNNS and Norfolk Flora Group held another one of their 'Wildflowers Revealed' meetings, this time looking at heathland species. I find these events very handy, as experts are on hand to point out the differences between similar species in the field, which makes the information stick in my mind more than reading about them in books. Despite having seen around 700 flowering plant species, most of them in Norfolk, there are always a few new ones too, particularly grasses which I struggle with. Being a joint NNNS meeting there are also people with wider interests to look at other groups too.

About 25 people met at the start of the walk at Marsham Heath, and after an introduction about the status of heathland and some of the species we were likely to see we headed off through a small area of woodland. We stopped to compare two of the smaller willowherb species (and Ian & I looked at a greenish-grey Russula sp) before heading through a gap onto the heathland. We were shown the differences between Western Gorse and Common Gorse (many people don't realised Norfolk has three species of Gorse), and Bob Ellis showed us an invasive Australian moss, Campylopus introflexus. 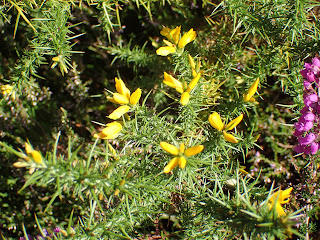 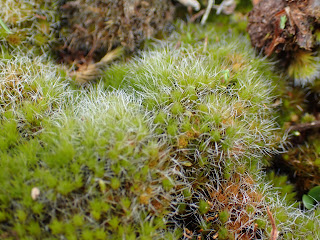 My first new flowering plants of the day were predictably sedges - Pill Sedge and Green-ribbed Sedge, followed by Wood Small-reed. We were able to compare Small Cudweed and Marsh Cudweed, before Robert Maidstone showed us a gall he had found on Gorse. It turned out that it was formed by Weevils, which is a bit unusual, and the fact that Robert hadn't seen it before suggested it was uncommon. When Tim mentioned it to the county beetle recorder it emerged that the weevil responsible (Stenopterapion scutellare) had not been seen in the county in recent times, so the 'beetle people' (Norfolk currently has a good proportion of the country's beetle experts) will be visiting to look for adult weevils. 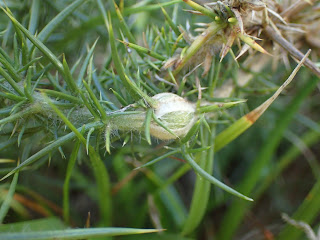 As we carried on I spotted a couple of Heath Assassin Bugs and Tim found another small plant bug, before Ian found some strands of Dodder on the nearby heather. This is an interesting parasitic plant that coats heather (and sometimes gorse) with red strands, with small clumps of pale pink flowers. Heath-grass was an underwhelming new species. 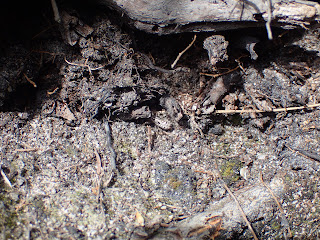 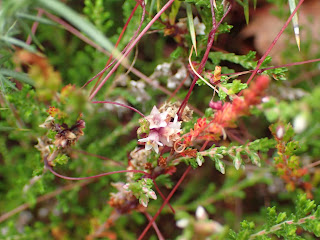 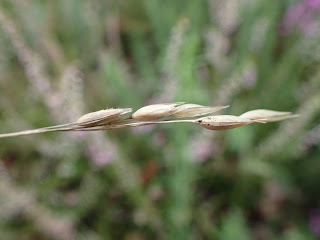 We left the heathland for a while and walked through an area of woodland. Here we stopped to admire two Skullcap Dapperlings (Leucocoprinus brebisonii), and whilst doing that the rest of the group had gone out of sight. This was a bit surprising, usually naturalists groups move incredibly slowly but this time the rest of them were off like a speeding bullet. We caught up with them having lunch under a large Oak. 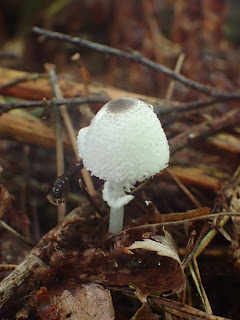 A few other interesting species were seen in this area. I found a small hoverfly that Tim was later able to identify as Paragus haemorrhous, whilst Heather Bees (Colletes succinctus) frutstratingly avoided the camera. A Roesel's Bush-cricket was caught, and nearby I found a Bog Bush-cricket, the first I've seen for many years. 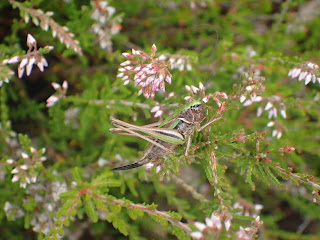 After lunch (and with some of the party having left) we had a quick look in the wooded area, seeing Tutsan and Golden Scaly Male Fern (i.e. D. affinis s.s.) before heading onto neighbouring Cawston Heath. Cathy was a bit concerned about me doing this part of the walk do to the high murder rate* but we didn't meet anyone else whilst here. I was wondering what all of the round broken pottery was in aid of when I was told that one day a month clay pigeon shooting goes on over the heath. Our main quarry here was Petty Whin, a rare plant and one that I don't remember seeing before, although I do have an undated and unlabelled record of it from my less conscientious younger days. We found it, but only leaves and seedpods, so again not too spectacular looking! 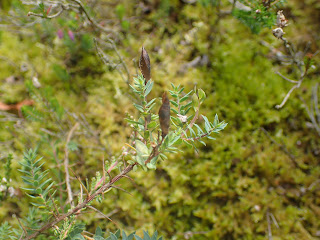 Finally we headed over to the reversion field, an old arable field that is being converted to heathland. Narrow-leaved Hawkweed and Hairy St John's Wort were seen here, along with Blue Fleabane and Eyebright. Mike found a very large Parasol and I found a Dor Beetle. A Beautiful Yellow Undering moth flew past, but flew off before I could photograph it. On the way back to the cars Mat Grass was my final new species of the day, whilst a couple of Stonechats were good to see. 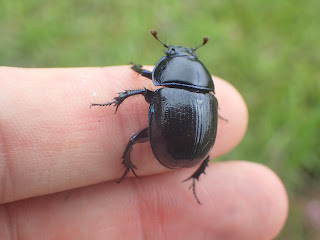 Thanks to Bob, Bob and Jo for organising the meeting.

* The main town in Midsummer Murders is Causton (pronounced the same as Cawston) and the programme is famed for the high murder toll. It hasn't been as good since John Nettles left though.
Posted by James Emerson