A very productive day in the Brecks, so much so that a few posts will be needed to cover everything. I started the day at Weeting Heath, where Wild at Weeting, an end of season celebratory event was being held. Normally this wouldn't really be my cup of tea, but I noticed in the event details that two flora walks were being led, and that these would enable visitors to see some of the rare species on the main part of the heath that is normally off-limits. I had wanted to see two of these plants, Spiked Speedwell and Maiden Pink, for some time, so eagerly booked myself on the first walk. Cathy decided not to come, but Ian, Jeremy and Vanna were all keen to come, so I picked them up and headed to Weeting.

Before leaving on the walk we had a look at the few Broad-leaved Helleborine spikes that grow near to the car park. 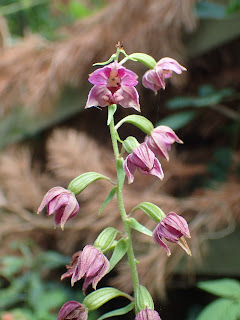 Our first scarce plant was Purple Stemmed Cat's-tail, a rather unremarkable looking grass, followed by the small yellow composite Smooth Cat's Ear. Somewhere along the line botanists obviously liked describing plants in terms of which bit of a cat they thought was most similar. Next up was a clump of Maiden Pink, an attractive plant which might look a bit similar as other pinks are now sold in garden centres. This was a new species for me, and I wasn't disappointed. We then walked across to an enclosure where Spiked Speedwell grows. This was one of my first target species back in 2014, so it was nice to finally see it, and as with the Maiden Pink it was flowering just at the right time for us. 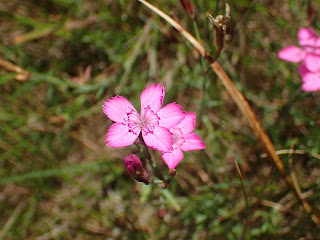 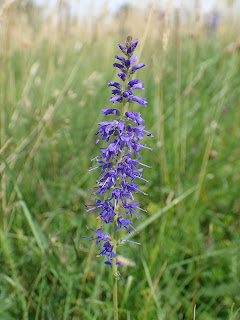 Over the brow of the hill we were taken to see some White Horehound, which was almost over, with only a handful of flowers still. From here we went across to some chalky pits, but some of the earlier spring flora that grows there had gone over. We did see Autumn Gentians, Purple Milk-vetch and Dwarf Thistle which was nice. 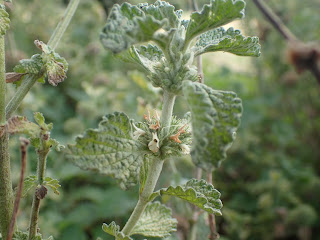 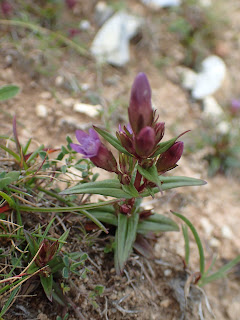 On the way back we visited the larger areas of Maiden Pink, before heading to a more recently scraped area where after a search we eventually managed to locate a patch of Sickle Medick (another new plant for me) that the warden had seen the previous day. 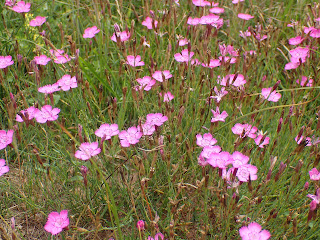 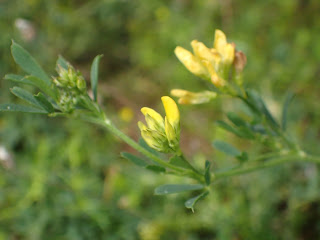 We also saw a good range of moths and bugs, which will be the subject of the next blog post. Our thanks go to James the warden for leading the walk and for his knowledge and enthusiasm. We had booked on the right walk too, as by 2pm a thunderstorm hit and we ate our lunch in the car as the rain poured down.