On Saturday afternoon I met Graham Moates at Bracon Ash church to carry out an impromptu wildlife survey at the churchyard. It is one of the churches that has been signed up to a churchyard conservation scheme, and there have been some nice areas left wild. I'd not visited before, but Graham had visited to survey small mammals and thought that it warranted wider recording, 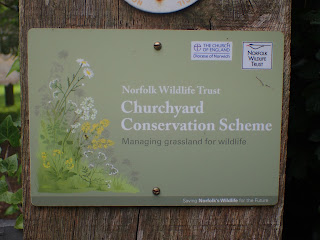 Whilst I waited to Graham to arrive I noticed some Enchanter's Nightshade growing in the boundary ditch, so I went and had a closer look. I found several caterpillars feeding on it, which I thought might be some sort of Pug moth. This put me on the wrong track and I was struggling to identify them, but fortunately Steve on Twitter pointed out that they were the larvae of a sawfly, Tenthredo colon, a new species for me. 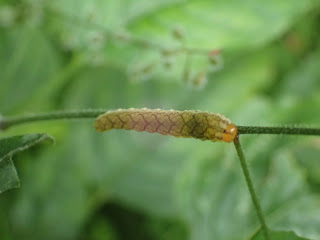 After a quick look inside the church, which is notable for housing the Heydon family masuoleum, we moved over to an area of creeping thistles. Here insects included Common Yellow-faced bee, Speckled Bush-cricket and Hairy Shieldbugs. One of the most pleasing sightings was of an ichneumon wasp that can be identified from photos! This applies to only a handful of the thousands of species. The females of Apechthis compunctor can be told from similar species because the ovipositor is short and down-curved at the tip, which was visible in some of my photos. 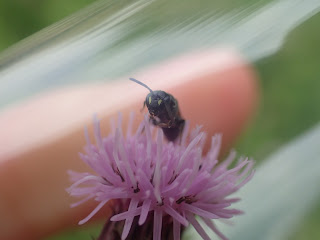 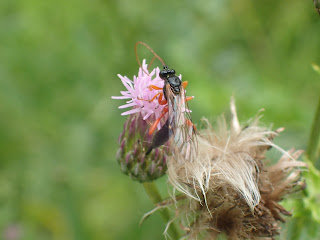 Further round I heard a Roesel's Bush-cricket, but couldn't find it. Luckily I did locate it before we left to prove I wasn't hearing things! We also heard some Dark Bush-crickets and I confirmed a scorpionfly was Panorpa germanica. Moving round to the back of the churchyard a Volucella inanis hoverfly was seen, whilst Cinnamon Bug (Corizus hyoscyami) was a first for Graham. 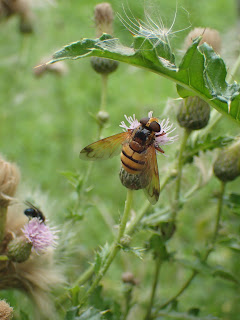 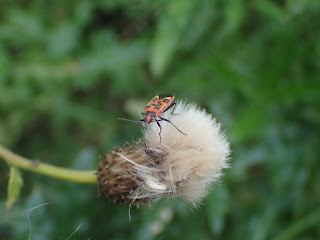 Another focus while we were there was leaf mines and galls, and a subtle but pleasing one to find was Maple-seed Pigmy (Ectoedemia louisella), which mines the samara (seeds) of Field Maple. 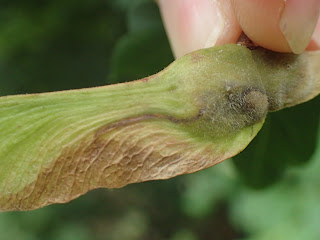 Two other insects of note were tiger craneflies. Nephrotoma flavipalpis has a nice orangey head and large black areas on the yellow abdomen, whilst I think the second one here is Nephrotoma flavescens because of the 'ace of spades' mark on the head. 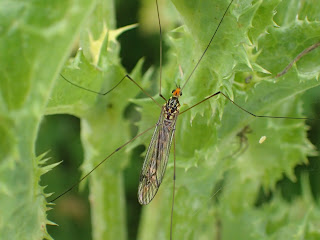 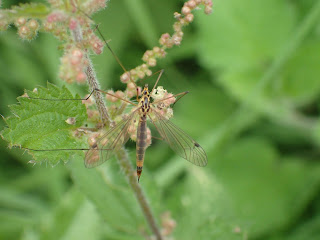 This was a very interesting visit, and in a couple of hours we generated over 50 invertebrate records. There is no reason why many rural churchs with wild areas wouldn't be just as or even more productive, particularly slightly earlier in the summer with more flowers out.
Posted by James Emerson