Last year Cathy & I spent an enjoyable July day in Northamptonshire watching Purple Emperors with Carl Chapman. As I have seen few species of butterfly outside of East Anglia, this year we again joined Carl for a trip to Northamptonshire, this time hoping to see two new species, Black Hairstreak and Wood White.

The first of our targets was the Black Hairstreak. This species can be quite tricky to see, due to a combination of scarcity, a short flight period, an arboreal nature and a habit of only flying in bright sunshine. We arrived at Glapthorn Cow Pastures, which despite the name is now an area of woodland with lots of Blackthorn scrub. The sign on the corner made it clear that no horses were allowed on the reserve, so reluctantly we all dismounted and stabled them before carrying on*. 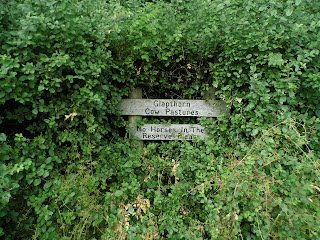 A bit further along we reached the gate onto the reserve. A neat sign gave an update on the Black Hairstreaks, and it wasn't promising. Apparently they had emerged two weeks early this year (the flight period is often only around three weeks in total) and at the time the sign was written only two tatty butterflies were being seen. It concluded by stating that ny the open day, which was today, it was expected that none would be present. All that remained was to work out whether the author of the sign was a realist or a pessimist.

The other thing we had against us was the weather, which was meant to be largely overcast with some showers. Fortunately for the time being the sun was shining, and a Silver-washed Fritillary flew past us. As we checked out a sunny area of Blackthorn we also saw Brown Hawker and Emperor dragonflies. A few more common butterflies were seen, but then we noticed a small group intently watching something up ahead. Catching up with them we found that it was indeed a Black Hairstreak, which quickly flew round in an arc. Would this be our sole sighting? Well no, because instead of flying off it landed close by on a patch of brambles. It remained here for over 20 minutes, providing my closest views of any hairstreak. 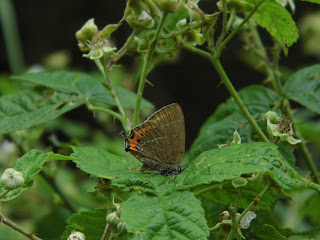 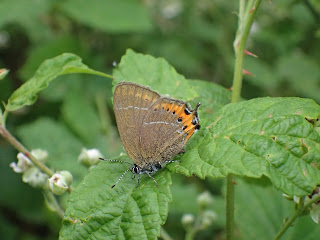 Eventually we decided to investigate further along the path, stopping briefly to photograph a horsefly. We hadn't gone far when we were called back by a shout of Purple Emperor. It turned out that one of the group, who were presumably mostly from the local Butterfly Conservation branch, had spotted a Purple Emperor feeding from a sap run, apparently a first for the site! 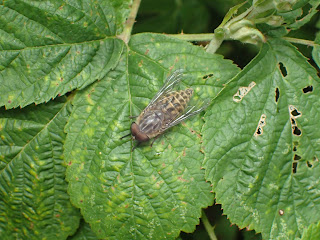 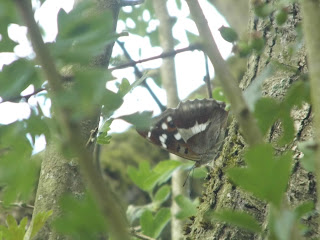 The Purple Emperor flew off shortly afterwards, so again set off down the path, and again were called back. This time it was to say that there was a glade close by with multiple Silver-washed Fritillaries present. Following the directions we found the area, which looked very similar to a number of other sunny areas, so why the fritillaries found it so attractive was a bit of a mystery. 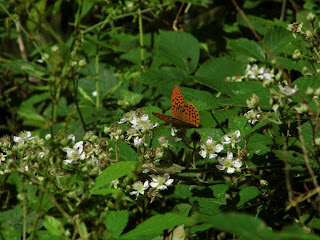 After a while we retraced our steps, seeing a White Admiral fly briefly into the treetops. We had been told that a second hairstreak had been seen near the entrance gate, but there was no sign of it. There was a male Gatekeeper, upholding its duties by sticking to the hedge around the entrance. With part one of our trip successful we returned to the car for a cup of tea. 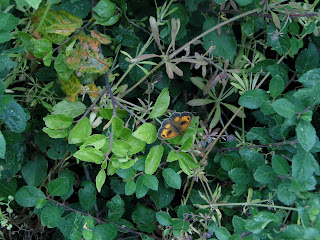 * I might have made that bit up.
Posted by James Emerson