This spring there had already been several Rose-coloured Starlings (I'm stubborn and still call them this rather than Rosy Starlings. Don't get me started on "Rosy Pastor" either) in the county, but I was content to stock up my feeders and hope that one would tag on to the large family group that were regularly visiting my garden. This changed when one turned up in Sprowston, 2.5 miles away. I do keep a Norwich bird list of sorts, and having failed to see one at Costessey a couple of years ago decided to go and look for this one. Ideally I would have walked there, but having worked out how long it would have taken to get there and back, plus waiting time, I couldn't do it before going to work so took the car.

Upon arrival the bird was out of sight in a nearby garden, being staked out by a handful of local birders. Twitches in urban areas can be rather awkward, but here everyone was very friendly, and I tried to repay this by answering questions from locals who stopped to ask what we were looking at, and in several cases told me about how they had been enjoying seeing the birds in their gardens during lockdown. After about twenty minutes I spotted the Rose-coloured Starling fly up into the top of an Elder, where it stayed for a while, in view but partly obscurred. Incidentally I read a tweet around this time that someone said seeing so many pin-sharp pictures of rarities made them not want to go and see them as they felt they had already had the experience via the internet - well my friend, this record shot is for you. 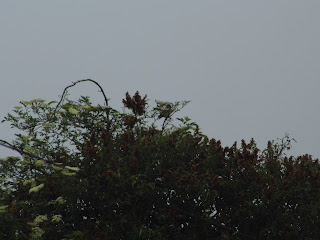