As we neared the longest day of the year lay-ins had gone out of the window - Rose was waking up early due to a combination of the light mornings, dawn chorus and us not tiring her out as much without her toddler groups. I was therefore already downstairs having had breakfast when early morning news broke of a Savi's Warbler reeling at Thorpe Marshes. This was a genuine county rarity and a first for the site. It was also a species that because of breeding potential might be kept quiet in other circumstances, (indeed it apparently had been heard a few days ago but not been reported). Cathy very kindly said I should go and have a look, and after finding my recently acquired Norwich City face mask I was soon out of the door.

It was a lovely sunny morning down at the marshes. When I arrived nobody was there obviously watching anything, but James Lowen and several others had arrived just ahead of me, and it was James who first heard the Savi's Warbler reeling from some sedges a bit further round on the marsh. We walked round, distancing not being a problem as it could be heard from a long section of path. For 20 minutes for so it called on-and-off unseen, before flying back and taking up a new position. This time it was out in the open albeit distant. I took a short video of it reeling on my phone, and a pointless record shot which I shall reproduce below (its the brown smudge in front of the third willow from the left!) This was only the second Savi's I'd seen, following one at Strumpshaw years ago. 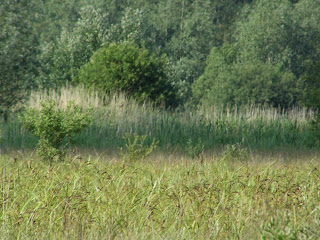 Two Grasshopper Warblers were also reeling, which was nice for direct contrast, and a Cuckoo called in the distance. Under different circumstances it would have been a lovely day to spend sometime soaking up the atmosphere, but aware that I have left the house at short notice and wanting to avoid the possibility of crowds I headed back, stopping to check some buttercups where there were several of the tiny hoverflies Neoscia meticulosa. The Savi's Warbler stayed for about 10 days, often showing well, and as far as I'm aware behaviour on site was good, vindicating the decision to put out the news (realistically given how busy the site has been this spring it would have been hard to keep it quiet for any length of time).
Posted by James Emerson