One of my target species from the start of the year was Harbour Porpoise, Norfolk's commonest cetacean. I didn't really know much about the status of porpoises around the county, but thanks to Carl Chapman's Norfolk Cetaceans Blog and twitter I was aware that the east coast of Norfolk produced quite a lot of sightings. At the start of the week Patrick Goffin had let me know that he had seen porpoises three days in a row off Winterton, so on Friday afternoon Cathy & I headed to the dunes for a seawatch.

It was a hot day and quite busy, but handily Winterton is large enough for us to pick a quiet spot on the edge of the dunes. I set up my telescope and after about 15 minutes picked out a small triangular fin poking up between the waves. For some reason I was rather surprised, but a second look was unequivocal, I had seen a Harbour Porpoise! In fact there were two, and despite their rather erratic appearances above the sea, Cathy managed to see one too. When the Porpoises had gone I kept scanning for birds, but other than a couple of Common Scoter it was mostly Terns, Gulls and Gannets. Just before we left a Marram Weevil landed on my hand, and a couple of Graylings were seen in the dunes. 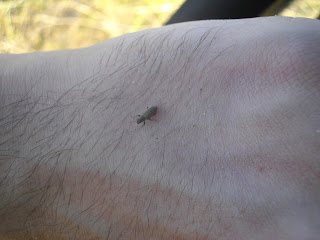