With a bit of free time in the afternoon, Cathy & I visited Tyrrel's Wood near Long Stratton. It wasn't a site that I had been to before, so I was interested to have a look around. It is widely described as a SSSI, although there doesn't appear to be a citation for it on the Natural England website unless it is called something different.

We hadn't walked far into the wood when we stopped to investigate some squeaking noises. We looked to the side of one of the path and saw six Common Shrews, presumably a family party although two of them were scrapping with each other. They seemed rather oblivious to us, but too fast to get photos of. Buoyed by this early sighting we carried on into the older part of the wood, where we saw Nuthatch and Treecreeper. Sadly there didn't seem to be many open glades, so nectar-loving insects were scarce.

Tyrrel's Wood is looked after by the Woodland Trust, and there were several wooden bridges and bits of boardwalk over some boggy areas. Unfortunately the damp areas also meant lots of midges, and Cathy got bitten quite heavily, so we would recommend strong insect repellant! I got off lightly, with just a couple of bites. There are no specific waymarked trails or maps, which has positives and negatives - the obvious negative being that as we took a winding path back we were never really sure how far from the exit we were!

Two other species seen of note in the woods were a Black Arches moth found resting on a tree, and some Oak Bracket fungus (Inonotus dryadeus), a fungus that exudes water droplets. 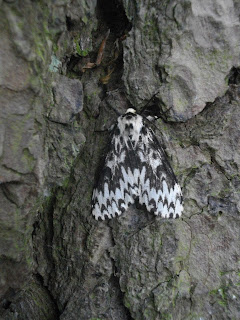 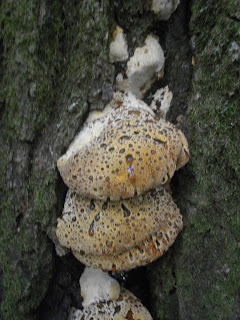