On Sunday afternoon news broke of a Purple Swamphen at Minsmere. You could be forgiven for not knowing what a Purple Swamphen was, because they used to be called Purple Gallinules, and after a bit of splitting this particular species is now known as Western Swamphen. The RSPB Minsmere account tweeted that the bird was ringed, and therefore probably an escape, so I went shopping and didn't think much more about it. I returned to see that there had been a retraction - it wasn't ringed, and information was emerging that there had been a movement of several other individuals through France this summer, away from their breeding area along the southern French coast.

The seemingly increased chance that this was a wild bird, and therefore a first for Britain, along with the excellent photo of the recent French bird here: http://www.faune-bretagne.org/index.php?m_id=54&mid=23405 made me want to go and have a look for myself. Figuring that Minsmere would be packed that evening, and having work to do during the day on Monday, it was Monday evening before Cathy & I headed down to look for the Swamphen.

Having arrived at Minsmere for the second time in four days (usual visit frquency about once a year) we headed down to south hide, where there was a large crowd of people along the path. The height of the vegetation meant that the favoured pool wasn't completely viewable from anywhere, so we picked a spot with a limited view but of the area where the Swamphen had last been seen. Despite showing well on Sunday and Monday morning, it hadn't been seen for at least 45 minutes before we arrived. An hour and a half later and the novelty of staring at a Little Egret was beginning to wear off.

Fortunately, before we gave up (or got hypnotised by the Egret), a very tall man beside us announced that he'd got the Western Swamphen, walking out of the reeds. A few seconds later and it became visible to us too, walking behind the Little Egret we'd been watching. It was a cracking bird to see - imagine putting a Moorhen on steroids until it grew to twice its size, painting it bluey-purple, stretching its legs and toes and painting them red, then shoving a Puffin's beak on the whole setup. The main group of birders hurried over to us to see it, but many still couldn't see because of the vegetation. Seeing that Cathy had already ducked out to give her place to another birder, I did the same rather than wait to get a rubbish record shot, so no photos I'm afraid. If you haven't seen it (and I'm guessing most readers will have done) then there are some good photos of it on Craig's, Peter's and David's blogs.

Also of interest was a pale pink flower growing in large clumps along the path to the hides. This is Marsh Mallow, which in ye olden days was eaten and may have been some sort of prototype for todays marshmallows. 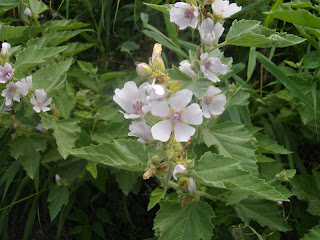