There is such a large and diverse number of species around that however long you have been interested in wildlife, there will always be species that you have not seen, never heard of or just overlooked. I tend to come up with many of my target species by looking through books or reading articles written by fellow naturalists, but increasingly I find out about 'new' species via the internet (usually wildlife blogs or sightings on Twitter) or word of mouth.

On Friday I had called round to James Lowen's house to see Yellow-legged Clearwing, and he had shown me a photo of a small, interesting-looking micro moth called Chrysoclista linneella. This brown moth has a panel of bright orange, studded with silver on each wing. It is scarce in Norfolk, with less than 10 records prior to this one, but one of the reasons for the lack of records is that it is usually only found by checking the bark of mature lime trees. The photographed individual had been seen at Earlham Cemetery, one of my favoured local haunts, and I decided that I would have a look for it on Sunday afternoon.

Sunday came round, and my plan was to get the food shopping done then head to the cemetery. I had just finished lunch when I received a text from Mark, a local naturalist, to ask if I had ever seen Lime Cosmet (the English name for Chrysoclista linneella)? I assumed that he had also heard about the Earlham Cemetery moth, so I said no, but I hoped to soon. He replied that he was watching one at Whitlingham! Whitlingham has a row of big lime trees forming an avenue south from the ruins of Trowse Newton Hall, and Mark, having heard about the habits of the moth had gone, looked and found one.

I headed straight down to Whitlingham, where Mark was standing near an old Lime tree. As luck would have it, the moth had disappeared, so we walked down the rest of the avenue, checking the trunks. Many of the trees were too smothered with fresh growth to look at properly, and in the end I returned to the original tree and saw the moth! Whether it had flown back, or been hiding out of sight amongst the gnarled bark I don't know. It was a great looking moth to see, and also a timely reminder of the amount of species that are present that I just don't know how to search for yet. Thanks of course to James Lowen for telling me about it in the first place, and to Mark for telling me about this one. Incidentally the distribution of records for this moth in Norfolk mainly centres around Norwich, so if you live here then maybe have a good look at the trunks of any lime trees near you. 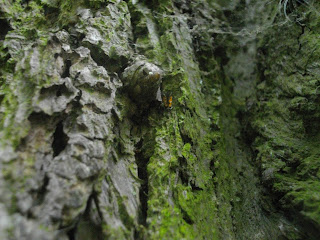 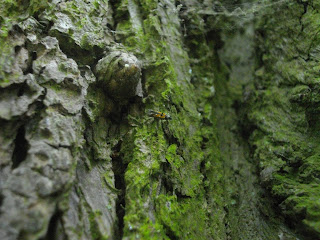