On Wednesday evening the Norwich Bat Group ran a walk at Thorpe Marsh. I had previously attended events at Whitlingham, but not done anything across the river. We met at the footbridge at 20:30, and as it was a light evening the bats were rather slow in emerging. We stopped near the recently created pools north of the broad, and watched as a Little Egret flew off. 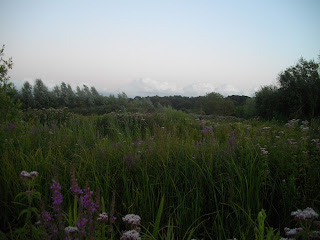 Further along, and with still no bats, I took to scanning for Noctules off towards Thorpe St Andrew. The first few things I picked out were the last of the evenings Swifts, but scanning further round I found a Noctule, joined at one point by a second individual. Buoyed the knowledge that we had at least seen some bats, we headed round to the wooded area along the river, where we detected and then had good views of a couple of Soprano Pipistrelles.

After watching the Soprano Pipistrelles we carried on to look over the river, which paid dividends with several Daubenton's Bats skimming low over the water. A Common Pipistrelle was detected flying along the path, although by now it was too dark to see it. Further round we saw more Daubenton's, including some snatching food from the water surface. Our final bat of the evening was a Nathusius's Pipistrelle, which was detected strongly a couple of times but again wasn't seen.

Thanks to the Norwich Bat Group and particularly Richard Moores for leading the walk. The next Norwich Bat Group events are at Scarning on Saturday 27th August and Train Wood (the start of the Marriott's Way in Norwich) on Wednesday 31st August - see the website for more details.
Posted by James Emerson