On Sunday I joined a group of botanists at Burnham Overy for a 'Wildflowers Revealed' walk. These sessions, of which there are usually one or two a year, are an opportunity for naturalists with an interest in plants to accompany experienced members of the Norfolk Flora Group to survey a particular habitat. The Flora Group are a well-oiled recording machine, with GPS units for checking grid references, tables of previously recorded species and years of experience, but these combined sessions tend to strike a good balance between recording, seeing scarce plants and helping less experienced botanists to learn how to separate similar species.

Upon arrival at Burnham Overy the tide was at its highest, which was fortunate because it was a big tide and had flooded most of the car park. Having parked up and been treated to some almond puddings made by Jo, we headed off along the sea wall towards the dunes. As well as the botanists we were also firtunate to have Sarah, Holkham's conservation manager, accompanying us and she told us a bit about the site as we went along. The landward half of the path was coloured pink and yellow by a mixture of Common Mallow and Black Mustard, with lots of Sea Beet adding greenery. As we neared the dunes the mallow and mustard were replaced by large areas of Bristly Oxtongue and Creeping Thistle. Other plants pointed out along the sea wall included Sea Wormwood, Upright Hedge Parsley and Tall Melilot.

At the start of the dunes we looked at a few plants that I was familiar with like Common Centaury, Lady's Bedstraw and Common Storksbill. A bit further along we saw Wild Cotoneaster, which was a new one for me. We also had a good look at a sweet pea, although my photos came out blurry due to the strong wind. It was identified as Lathyrus heterophyllus, sometimes called Norfolk Everlasting Pea. Mike made a strong case for not using this name, as it is a non-native species with no real connection with Norfolk other than first being recorded here as an introduction. Whilst looking at the pea I spotted a small Natterjack Toad heading for the vegetation - my first 'adult' having only seen large tadpoles before. 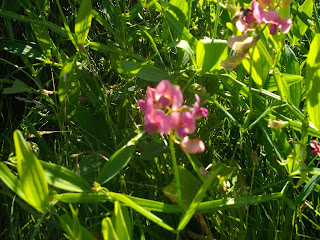 Continuing across the dunes we stopped to look at some dainty Fairy Flax before heading down into some damper dune slacks. I stopped to watch a Wall butterfly, and retraced my steps to watch a Hummingbird Hawk Moth that some of the group had found. A Grayling butterfly nearby was also of interest. Walking eastwards there was lots of Sea Spurge, some seedheads of Marsh Helleborine, Distant Sedge (Carex distans) and Sand Cats-tail (Phleum arenarium). The latter two were unsurprisngly new species for me as I know very little about sedges and grasses. Some flowering Sea Holly was nice to see, and we walked through a swathe of flowering Rosebay Willowherb before stopping for lunch. 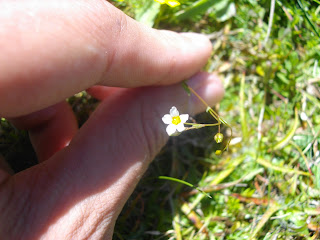 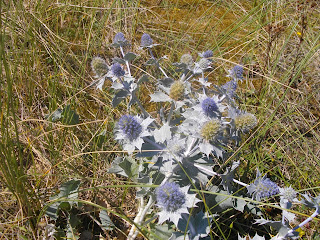 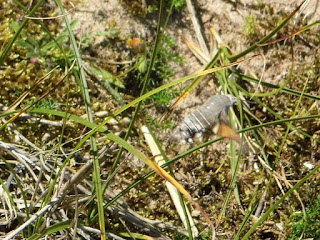 Our lunch spot, a sheltered area on the edge of the pines proved to be very good for insects. Before sitting down I found my first Tachina grossa, a large black tachinid fly. Whilst eating we were surrounded by Ruddy Darters, and in a sunny area of bramble we could see Common Blue, Small Copper and Brown Argus butterflies. At least one Dark Green Fritillary flew past too. After lunch we continued along the dune/pine interface, finding some Blue Fleabane. We then headed into the woods to see the Creeping Lady's Tresses, which have had a good year here. I hadn't seen this species since I was in my teens and regular at Holt CP, so it was good to get reacquainted with it. 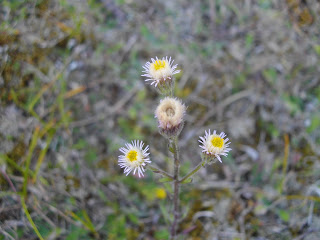 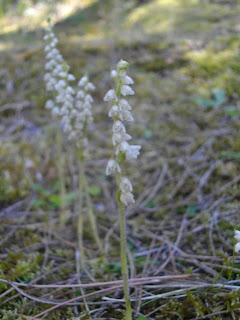 We walked south through the pines to join up with the main path, where Mary pointed out pale patches of White Cushion Moss (Leucopbryum glaucum). Three Red Longhorn Beetles were observed on a fallen log. Walking back towards the dunes we stopped at a sunny glade, where Hemp Agrimony was attracting lots of insects. A fritillary flew past, and it turned out to be Silver-washed, a recent arrival at Holkham. Whilst waiting in case it settled nearby, I noticed a Purple Hairstreak fly down and briefly settle in front of us. 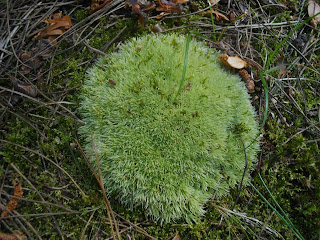 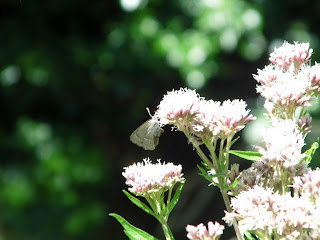 Emerging back out onto the dunes we had a quick and unsuccessful look for Ant-lion pits, before heading westwards to look for Jersey Cudweed, a rare species found at only two sites in Norfolk. We found several flowering spikes on a private part of reserve, and also saw Strawberry Clover and Creeping Willow nearby. On our way back we saw some gone-over Autumn Gentians, unusual for the site, and also the unusual 'string of sausages' lichen Usnea articulata. 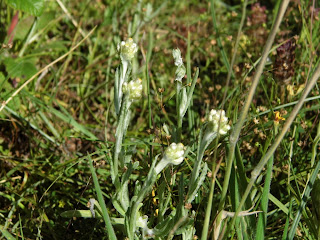 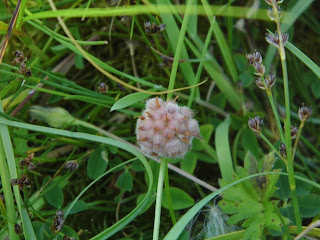 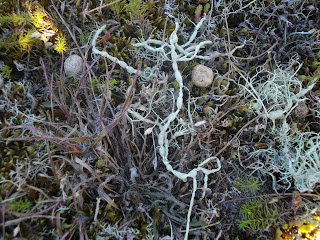 Thanks to Sarah for guiding us, and to the members of the Norfolk Flora Group and NNNS for their expertise.
Posted by James Emerson