Having returned home from the Strumpshaw moth morning, I had nine moth free hours before heading to another event. Saturday evening saw the third of four wildlife workshops being run to help record and encourage recording at the Plantation Garden in Norwich. This session was in two parts, so that people could see the moth traps being used tonight and could have a look at the catch on Sunday morning. I was busy on Sunday, so popped along to lend a hand in the evening.

I arrived just before nine, and although it was beginning to get dark we knew it would be a little while before the moths started to arrive. I had taken my bat detector, so I showed a few people how to use it, although sadly the only bats detected were brief flypasts. By the time the moths had begun to arrive the group had decreased in size, although it look like many people came to have a look in the morning.

Species seen whilst I was present included Common Emerald, Brimstone moth, Lesser Broad-bordered Yellow Underwing, Marbled Beauty, Copper Underwing agg and a V-pug. A micro moth, Cydia fagiglandana, identified from photos, was a new one for me. The final workshop in the series takes place in October. 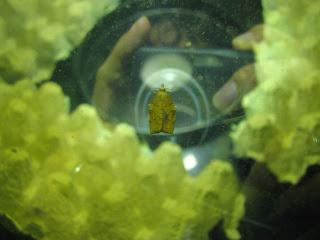